How to Learn from Coding and Development Tutorials: Break it Into Pieces

In a previous blog post I wrote about GDevelop, I mentioned shorter tutorial sessions.  Rather than doing a whole tutorial in one sitting, it’s usually better to focus on completing and really understanding a few steps at a time.  If you try to take everything in one bite, you will probably feel overwhelmed.  It will be harder to maintain your attention span and absorb important details.

In one of my previous posts about study tips, I mentioned something called the Pomodoro technique.  If you look at the science behind it, the problem it addresses is that “Working for long hours can reach a finale of cognitive boredom.”  The effort required to learn from a tutorial can wear down on your attention span.  It’s just like exercising any other muscle.  Tackling the tutorial in smaller portions helps to combat this weariness.

Know What You’re Building and Achieving

Before you start the tutorial, I highly recommend looking at the end result of what you’re actually building first, if possible.  This step gives you overall context on what you’re trying to accomplish.  That way you’re not just blindly following steps with no understanding of how they contribute to the end result.

Imagine that I’m teaching you how to cook a certain dish.  What if I just gave you a list of ingredients, and told you the steps, but never told you what you’re making?  You’d likely be disoriented, and maybe even distracted, because you don’t know where you’re going.  And what if you accidentally messed up a step or two?  How would you know the end result was wrong if you didn’t know the intended result?  As the process continued, you probably could make some educated guesses as to what’s being prepared.  But think of how much more sense it would make if you knew from the start.  You’d see more clearly how every part of the recipe fits in with the final product.

Many tutorials might include a link, screenshot, or some way to see and interact with the end result.  If not at the beginning, it might be at the end of the tutorial.  There could be a detailed written description of the end result as well.

Some tutorials include a partially completed project at the end of each step or section for you to check.  These are helpful in making sure that you’re staying on track throughout the entire tutorial.  For example, the Python Pygame tutorial at CodersLegacy does a pretty good job of giving you a checkpoint of what the project should look like after each section.

Unfortunately, sometimes the tutorial just does not include a finished result for you to preview.  That’s alright, as it’s not a required step, but it’s helpful if available.

How to Break a Tutorial Down

One of the challenges you might face is how to break the tutorial down.  How do you decide what pieces to do?  How do you know where one piece should begin and end?

Some of the answers will depend on how the tutorial itself is structured.  Since I’ve been working with the GDevelop game engine, I will use the official Asteroids game tutorial as an example.  I really like that the GDevelop tutorials are broken down into steps and sections: 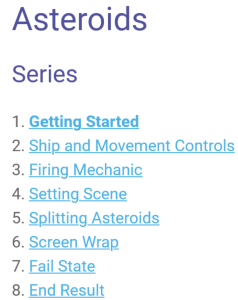 Make sure you understand each step before you move on to the next.  I will cover this more in the section about how to be actively engaged.  For now, ask yourself these questions after each step:

If you’re working with video tutorials, they might be broken down into separate videos.  For example, the GDevelop Asteroids tutorial is also available as a two-part video series, totaling about 10 minutes.

With video tutorials, note that they tend not to have as many distinct sub-section breakdowns as text tutorials do.  For instance, look how many sections and subheadings were in the Asteroids text tutorial, versus two separate video tutorials.  For the video, you might have to be more intentional about slowing the flow down a bit. You’ll need to pause and rewind to isolate a step that you’re focusing on.  It’s also more difficult to skip to specific parts, if you’re not sure which portion covers the material you want.

Sometimes, you’ll run into long tutorials that don’t have sections, or the sections themselves are also really long.  In such cases, you can take two approaches to breaking them down.

If the video is on Youtube, sometimes the creator might add timestamps for specific steps or sections in the video.  That’s helpful if available, but it’s not something I see often in tutorial videos.  You could keep your own personal list of timestamps for the different steps. Here’s a guide to creating timestamp links for Youtube videos.

Some platforms, such as Udemy or Scrimba, have features that allow you to pause a video and make notes within the platform.  Each “timestamp” will have your notes attached.  You can use this feature to create a set of virtual bookmarks for yourself.

I mentioned the Pomodoro technique earlier in this article.  If you are not familiar with it, I suggest you learn more and try it out for yourself.  It’s a great way to break your work up into timed sessions, especially if your tutorial does not have manageable sections.

You can combine this approach with tutorials that are already broken down, depending on your comfort level.  Maybe for each 25 minute session, you get as far as you can on a particular section, or several smaller sections.  The goal should still be to understand each section after you finish it, rather than trying to do as many sections as possible.

Another option is to chunk things into task or functionality-based sessions.  This approach might be more challenging, as it’s not always clear where one task begins and another ends.  Every time you learn enough information to accomplish something meaningful, that can be a section.  Then stop and make sure that you understand how you did it.

What kinds of tasks are meaningful?  For instance, creating a title screen could be one “meaningful” task.  But you can break that down even further, depending on your level of experience.  Maybe you first break that down into understanding how to draw text on the screen.   Perhaps you learn how to choose a font, before you draw the text on the screen.  Experiment with this process, and don’t hesitate to whittle down on the details as needed.

So, we saw the importance of taking the tutorial in smaller bites, and some approaches to how to do so.  If you are having learning and applying skills from tutorials, try this first step the next time you tackle a tutorial.

In the next post, we will discuss how to actively engage with a tutorial.